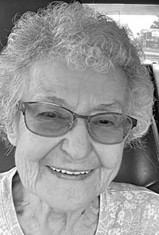 She was a member of Pleasant Ridge Church of the Nazarene in Harrisonville. She enjoyed playing the organ, singing, sewing and reading. She also loved spending time with her family.

She was preceded in death by a son, Jeffrey Wright; grandsons: Cyrus Lewis and Joseph Wright; and a granddaughter, Jenevieve Wright.