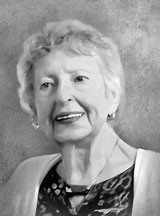 Born January 5, 1926, in Warfordsburg, she was the daughter of the late John F. and Georgia (Mellott) Lewis and the widow of Curtis A. Apple, who passed away June 7, 1996.

She was a life member of Cedar Grove Christian Church, Warfordsburg, where she served as deaconess emeritus. She was a member of Warfordsburg Lioness Club and a member of the Order of Eastern Star, Berkeley Chapter 77.

She was a former employee of Letterkenny Army Depot, Chambersburg, and Sagner Inc., McConnellsburg.

She loved to bake and be surrounded by her loving family.

In addition to her husband and parents, she was preceded in death by an infant son, Curtis A. Appel Jr.; a sister, Velma Bishop; and two brothers: Kenneth and Fred Lewis.